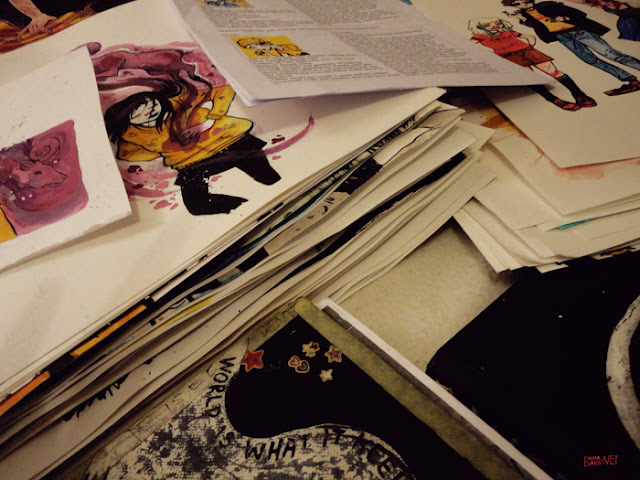 So the FMP deadline is upon us! 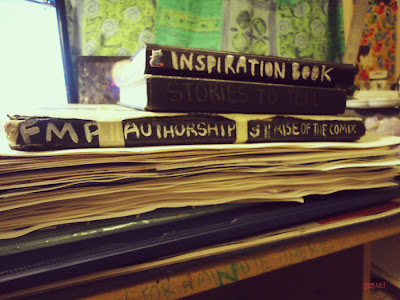 When I started this project it was mainly about finding a way to turn what I love to do, and have always done, in my spare time into a project I can share with people. And I have achieved this to the simple explanation that I am printing books and selling them to the public.
As stated in my manifesto on my tired eyes blog I had lots of plans for outcomes. On reflecting, the main thing i can say firstly is how much i overestimated how much i could get done in this time.
This is apparent mainly in the fact that 4AM isn't a printed as a book yet, as planned. I must stress this isn't due to laziness. The problem lay in this being unknown territory for me and being my largest comic project. Things took a lot longer than expected and it hit a lot of problems, of which these were mainly due to the length of the comic and all the issues that that throws up while trying to keep it moving along consistently.

Other than the slight miscalculation of timings, i feel this project went well. It's been great turning what i love doing into possible commercial outlets. Not only has it made me realise what i want to do illustration wise after uni, but how to go about it and who might be interested. I've not only learnt how to take a idea all the way through the process until you hold the printed thing in your hands, i've found a way of colouring to produce more uniform and looser results; Two things that i wanted to achieve from doing this project as when painting i tend to get bogged down in the details, working on separate layers has really helped that. Other pieces that were part of this project like Numb and the finished character based paintings (prints) begin to suggest to me a market through who has been buying them or expressing interest. My to-be-completed comic, 4AM, has already gathered interest to purchase when completed and i've been promoting it with updates people can read and see on my sketchblog and tumblr along with other social networking sites. Which is gaining positive responses. Along with my promotion book Tired Eyes/3:59AM of which has some completed pages in it to go forth as further exposure when i gave these out at the London Book Fair or to comic publishers i admire like NoBrow and i also have plans to submit the finished comic to Blank Slate book's online submission amongst others.

As far as research went it all started last year when I did my first experiment and research into using some pre-existing characters with Terry, my first published narrative comic. It showed me that it worked for me and lend me further to want to dedicate my third year to the same type of work.


As far as artist research goes, that is an on going and daily thing. It's quite hard to keep track of everything that inspires you, but i attempted to by keeping a book (Inspiration Book) that i filled with any images or pictures of books to act as an encouraging source. Also, upon my shelves i have an ever growing collection of small books and comics after the same vain of which I strive for, both artwork quality wise and simply the format and way it's printed. As quality and simply being a lovely object was one of my aims, these books fill a very important roll. Not forgetting, they also offer a good insight into where i see my work fitting in the market. 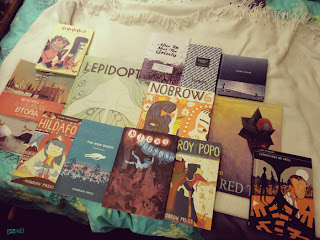 I also put a bit on this blog about some of the main influences and books I would like to produce something similar too.
Finding new artists and books I like is great. Not only enjoyable to read but a get resource of inspiration and probably most importantly hope and direction.

Throughout the summer, before the start of my final year at uni, i kept a sketchbook (Stories to Tell) that i filled with storyboards of concepts or narratives to run with when i started back.
When i was back at uni i started a new sketchbook (FMP) that i worked in (and have just filled up the last page of today) full of further development of ideas/characters and towards the end, repeated re-workings of 4AM's storyboard.


Throughout the process and keeping a sketchbook for ideas and experiments, i had the chance to continually evaluate the direction of my work. I learnt and tried out a lot of new methods, silk screen, ink in different ways, looser, neater, detailed, simpler...etc that can be seen through more experimental pieces in my FMP sketchbook and stand alone A3 paintings.
Among other things, on a method level, Numb was an experiment in colouring digitally and doing unconventional and more flowing and visually appealing page layouts.
For 4AM, as well as all the other tests it conjured, it was an over all good experiment in finding a good way to paint a comic in my style. I painted on layers. Most of the time the line-art was on one sheet of A3 and the coloured ink on another.
Around christmas time i needed to make something; A smaller piece to see through to the print and production stage and hold in my hands at the end. Basically a test run as well as a rest bite and a chance for evaluation of my practice/the FMP project's direction. So Numb was created. Taking roughly two weeks from conception to completion. It was a good test in many ways and having a physical piece was a needed development item. Numb was shortly then translated into Engourdi (French) to sell at Angoulême's international comic festival. 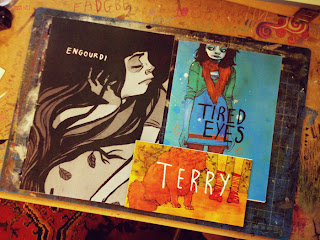 After France, i soon realised that i wasn't going to get time to do all the side projects i wanted to do this year before the april deadline and needed to start work on my main book, 4AM. Originally i was aiming for completion of the finished comic for the London Book Fair, and therefore this deadline, but around the middle of march i had to make the call to push back the deadline and rearrange promo plans for the book fair. I regret not having the book finished for this deadline for professional reasons if nothing else, but i now see how the previously mentioned promo book Tired Eyes/3:59AM was probably a better thing to take to london for the purpose of it anyway.

Extending the deadline was a decision i had to make simply for the reason that i wasn't willing to rush and therefore not produce something i was happy with. After all the point for me of 4AM was to try get that little bit closer to something appropriate for the market i wanted as well as finding a way to turn how i paint into a method of storytelling; to make something different, looser and every image a stand alone piece i liked, as well conveying a story with themes and meanings that i had wrote.
I also see the point of this FMP project as the point of your degree where your practice takes over. You do something that you want to do and would do if you could whether or not it was being assessed. For this reason it's okay. 4AM will get done (new deadline is the 20th of may in time for a selling event at London's MCM EXPO and the end of year degree show.) because it's what i want to do. This is just a checkpoint in my practice and process up to this point. I'm looking forward to holding the finished 4AM in my hands and the new projects i want to do after that in a months time. 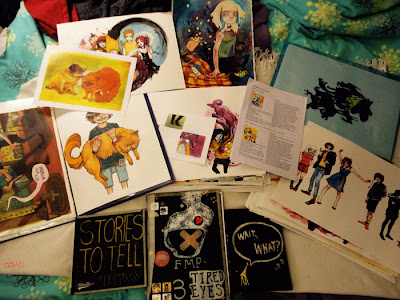 I have attempted to take a picture of all the work in piles and folders i have done for this project (seen here to the left) but it probably isn't very clear. It isn't feasible to put EVERYTHING on this blog.


For this reason due to the mass piles of paper required to make a comic and an unfinished one at that, i will bring the pile along as well as a USB containing the completed pages pulled together in photoshop for the presentation.


I will also have my four sketchbooks for this module. (FMP, Stories to Tell, Drawings from Life and Inspiration Book).
As well as a folder on the previously mentioned USB of all the revelvant finished stand alone character paintings that aren't on this blog. (This blog had been mainly the experimental stuff as the finished pieces tend to get uploaded onto my portfolio site- emmaevans.net) And the rougher and sketchy stuff has remained in my FMP sketchbook or Stories to tell sketchbook.  Everything is available upon request.


I will bring the applicable other artist's books as examples of where i fit into the market and what i am going for in terms of format too. For actual artwork inspiration some of the books are relevant but the inspiration sketchbook or the influence part on this blog is more useful for that. 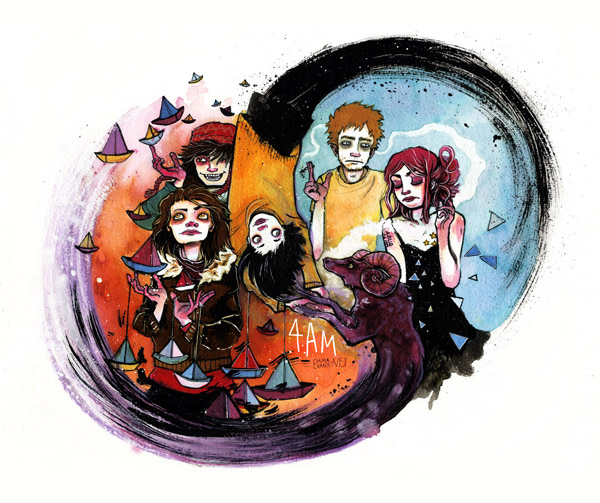 Back to the continuation of 4AM comic pages!
Posted by TEE at 17:27